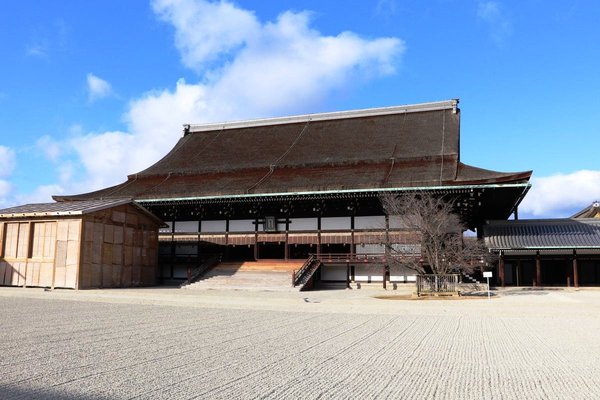 Due to the current Emperor’s abdication, we will enter a new era, “Reiwa” on May 1.

The Imperial family lived in the Kyoto Imperial Palace located in the ancient capital of Kyoto from the 8th century to 1868.
Era names have been selected by officials for more than 1,000 years.
For the Imperial family, the palace has a special meaning.

So last month, the Emperor and Empress visited there to hold a tea party to thank officials and dignitaries from the region.
It is located in Kyoto Gyoen Park which is easily accessed by subway.

The Kyoto Imperial Palace consists of some buildings and gardens.
Even if you only have the chance to see only gardens and the main hall building, it’s still worth visiting.

One of the gardens, “Oikeniwa-garden” is a Japanese strolling garden.
You can enjoy various scenery such as an arch-shaped bridge, a lot of different kinds of greenery and trees, pebble stones and a spacious pond.
At the same time as being a splendid garden with a spectacular look, you may also meet beautiful birds including herons, daurian redstarts and so on.

The main hall “Shishinden”,is the most important building because it Is where ceremonies for past emperors had been held.

As we will enter a new era, we would like to advance without forgetting the beautiful things that have remained since ancient times.